It might have been a short trip, but it was worth every minute of it.

Okinawa is less than an hour by plane from Taipei and mostly famous for its long life expectancy and the related “Okinawa diet” (you should like fish, seaweed, purple sweet potatoes and bitter gourds, if you’re going to try that). But we were only there for 3 days, so I don’t expect any lasting effects just yet. I also avoid bitter gourd like the plague.

I doubt that coke has anything to do with all the healthy centenarians on the island, although they sure seem to try.

It was Anny’s idea to go there, but William, Annabelle and I didn’t need much convincing. So we went to the airport really early on the Friday of mid-term week and took off.

We landed at the “International Terminal” which looked a bit like the cargo terminal. 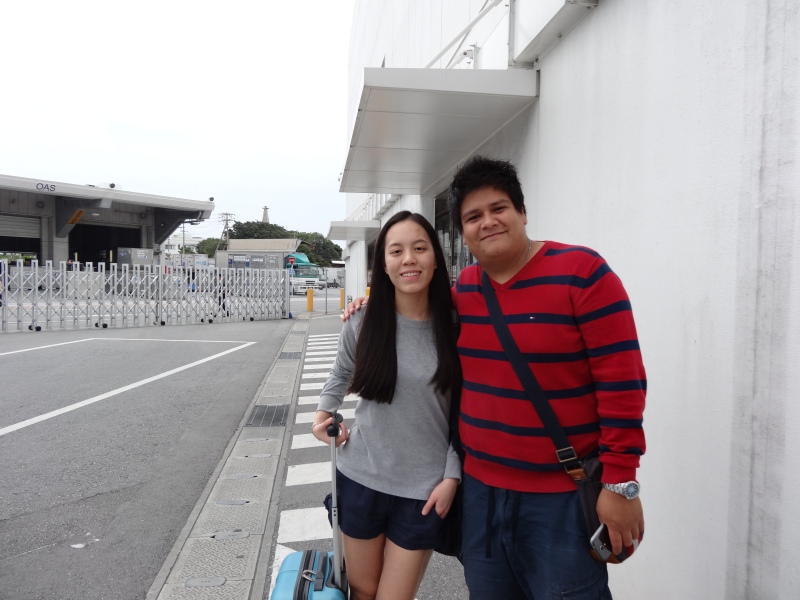 Anyway, the airport had those fabled Japanese toilets in the restrooms! They heat the seat for your ass, play music and fake flushing noises and clean and perfume your butt after you’re done with whatever you did in there. Let’s say it was an experience. 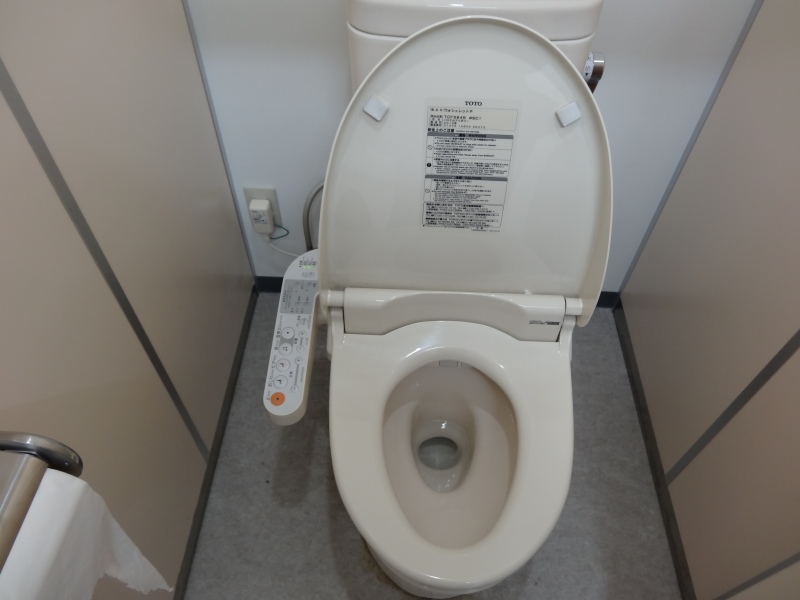 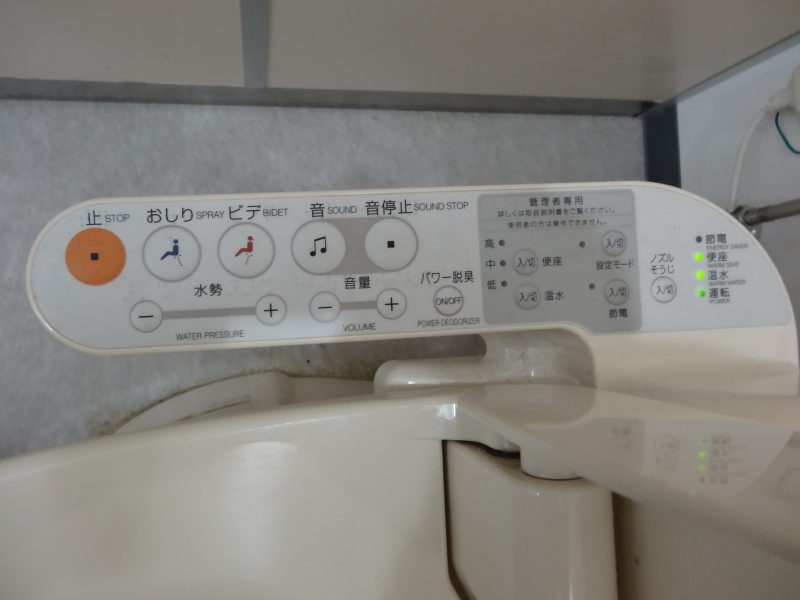 In order to do anything of importance like let’s say… exchange money, take the monorail into the city or find a tourist information, you have to take a shuttle bus to the “Domestic Terminal” (maybe they just don’t like foreigners very much?). 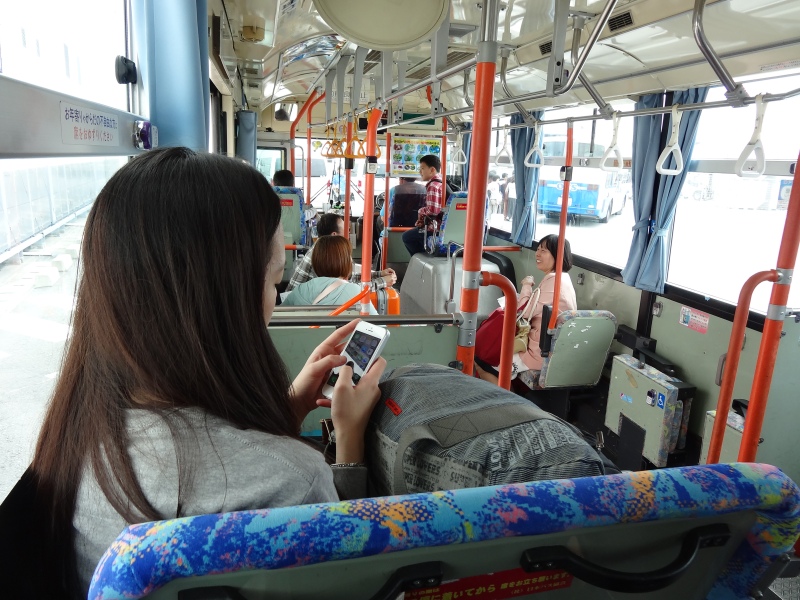 We stayed at Grace Naha Guest House which was lovely (once we found it). 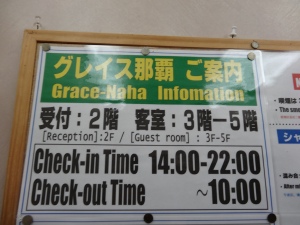 We spent the first day exploring Naha’s Kokusaidori Street, the local main street with its cute and weird shops, markets and eateries.

Looking cool as anything, of course ;)

This little fellow is Okinawa’s signature animal and he’s everywhere, by the way. 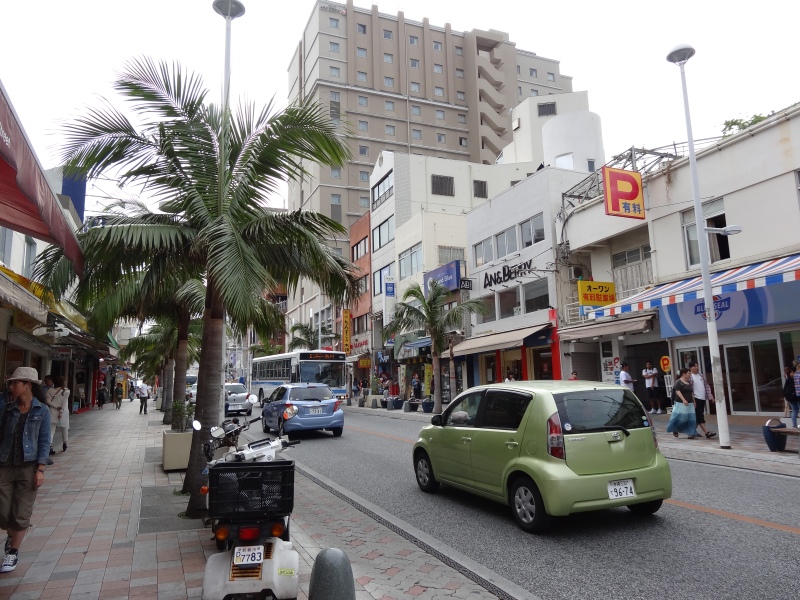 Yeah, that’s a real snake in that jar of liquor.

This sign had us slightly confused. It’s good to know that the place you’re standing at isn’t exactly safe in case of a Tsunami, however, they mentioned to fail which place was… so… what is this information supposed to do for you?

We stopped worrying and tried some of the signature salty ice cream instead (way better than the name suggests!) 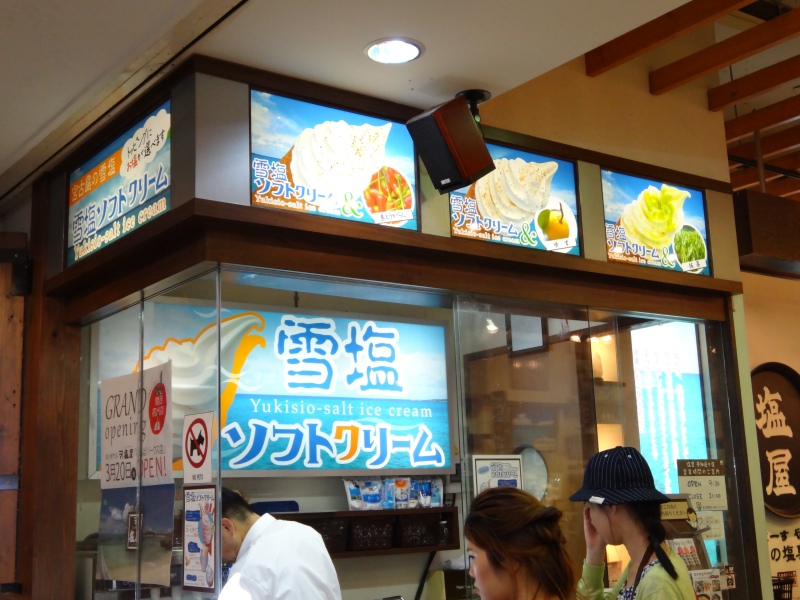 Yes, it comes with cornflakes. No, I was not bothered by that.

One of the curiosities was tiny pineapple:

Come on, you know you wanted me to go there. They look absolutely cutsey-wutsey and I never use words like that.

We also needed a coffee break to add some caffeine into our bloodstreams, before we considered dinner. It is surprisingly hard to find vegetarian food in Okinawa. Most dishes include fish, pork or beef, and the cooks seem unwilling to leave anything out.

That evening we found a place that had beer for 100 yen, so we had some with our fried noodles and sashimi respectively. (Do I have to add that we came back for a beer there every night? Fine, we did. It was island time, people!)

On Saturday, we went to a Chinese garden, where William made ample use of his selfie-stick. 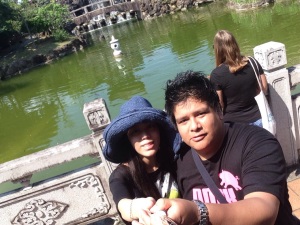 What a gorgeous place! 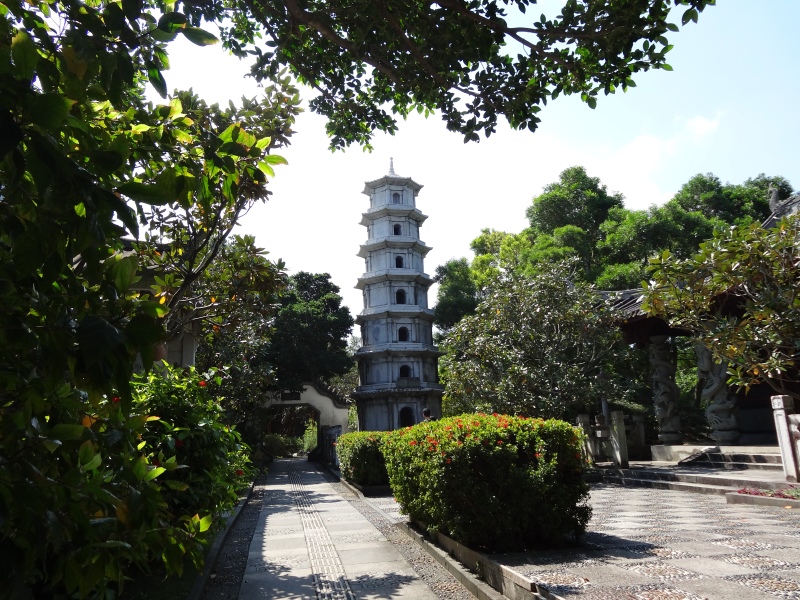 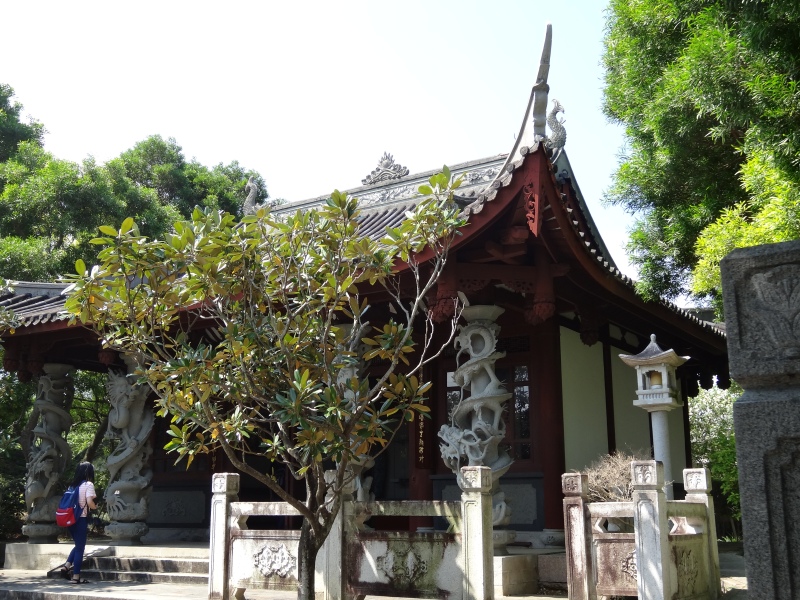 If you can’t pose like a boss next to a waterfall, where can you do it?

After that revelation of a garden, we went to see a shrine, where you have to follow a specific cleansing ritual, before you’re allowed to approach and make a wish. (What would you wish for? :) 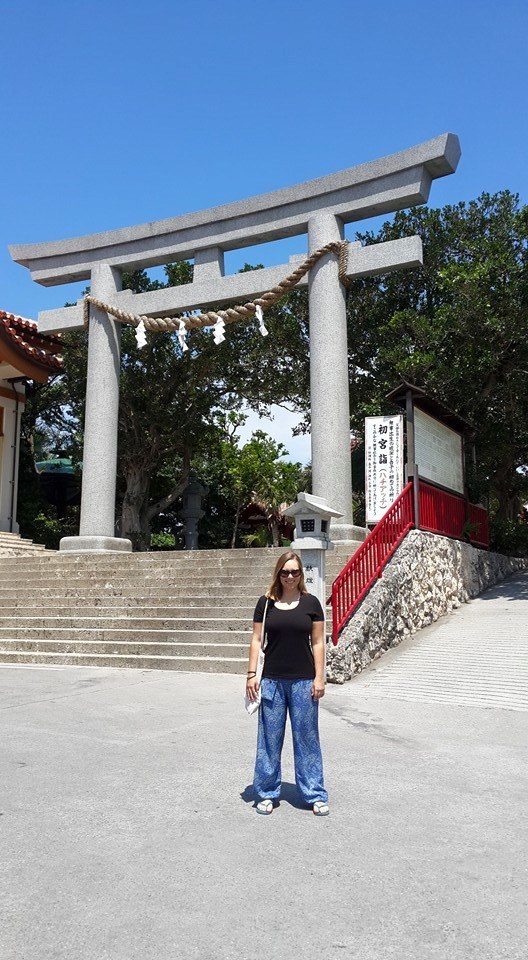 The shrine was conveniently located next to the city beach, so we had a look there, too. 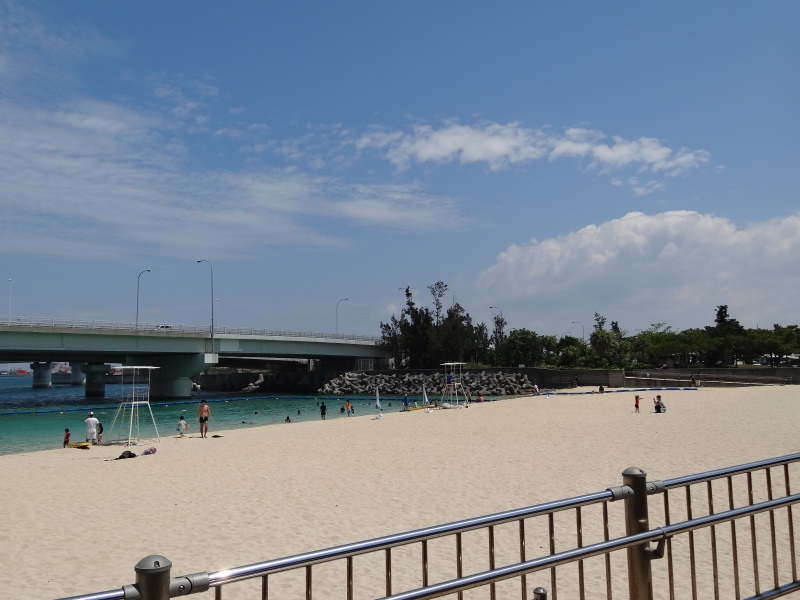 At noon we picked latecomer/more diligent student Anny up at the airport. 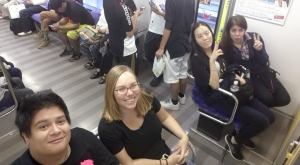 And the afternoon was spent at Shuri castle, where the rulers over the island used to live. 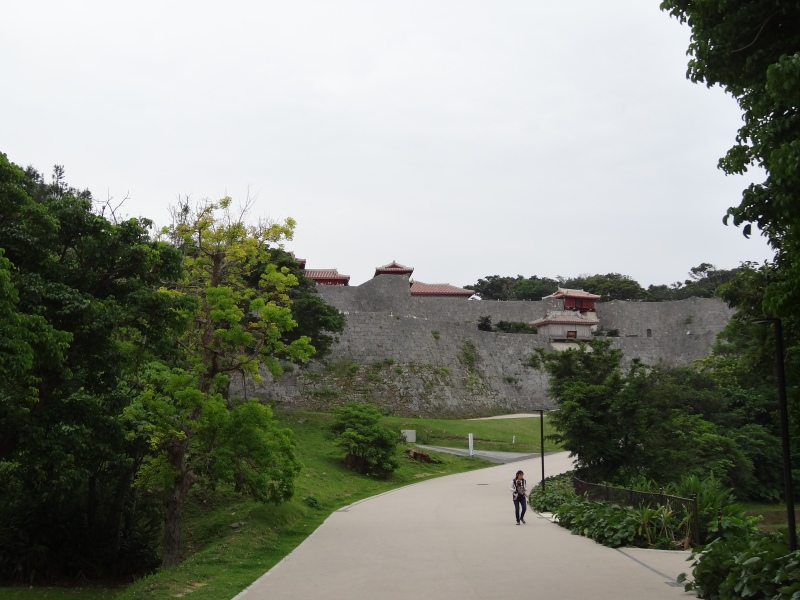 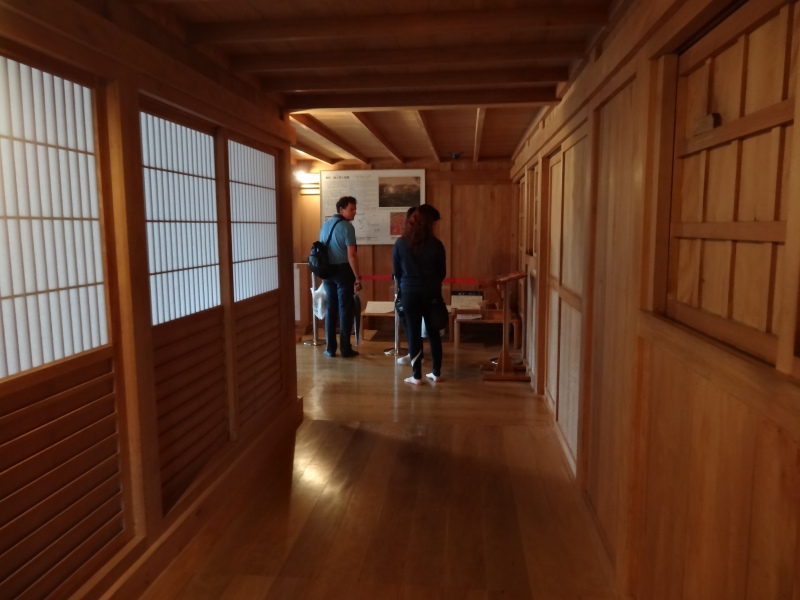 Examining the Tatami mat material, I found it quite comfortable. (I grew up in a house with cork floors, feels really nice and warm against bare feet)

We had a rest before dinner, but as so often lately, I felt somewhat restless, and decided to burn some of my excess energy. While running up and down the stairs of the Grace Naha, I found myself a beautiful rooftop terrace with a lovely view over the nightly lights to work out on and let go of my negative thoughts. For the first time in quite a while, I felt strong and free and like myself again.

We also booked a tour with the agency Seasir to go snorkeling on Sunday. Here are some impressions from their website.

Looking fresh at 7 am!

Our cute (okay, hot) snorkeling instructor Aki went over the basics with those new to the adventure and then we jumped in. In spite of the wet suits and the warm sun, the water was still really cold.

We went to 3 different diving sites and saw a sea turtle up close at the second one. Each time we lost some snorkelers to sea sickness (Not me, not this time! Maybe I broke the streak?). At the last site only 3 were left.

Anny was a total trooper, it was the first time snorkeling for her, and she took to it like a fish to water (feel free to insert some other appropriate marine imagery of your choice here).

For me, the best part was the boat ride back, it took about one hour and we spent it on the upper deck in the front of the boat (I believe there is some fancy seafarer lingo involved, but I’m too lazy to look it up now), where the wind was blowing something fierce. I felt incredibly alive and free and it was simply perfection. Occasionally, before falling asleep, I still go back to that moment.

Also, if you go on a boat ride and don’t take a selfie, did it really happen? 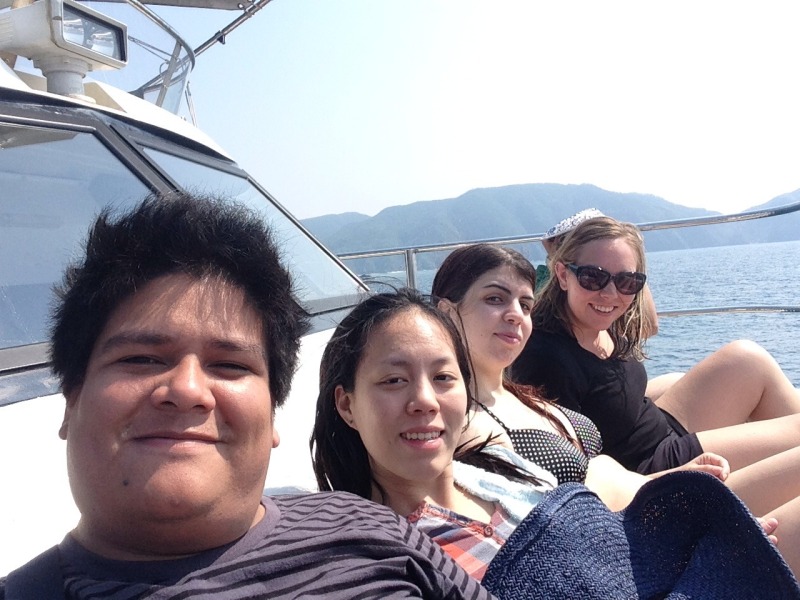 Our last meal on the island was sushi. I don’t eat fish or meat, but even the vegetarian varieties were excellent. So, imagine I looked like this guy: 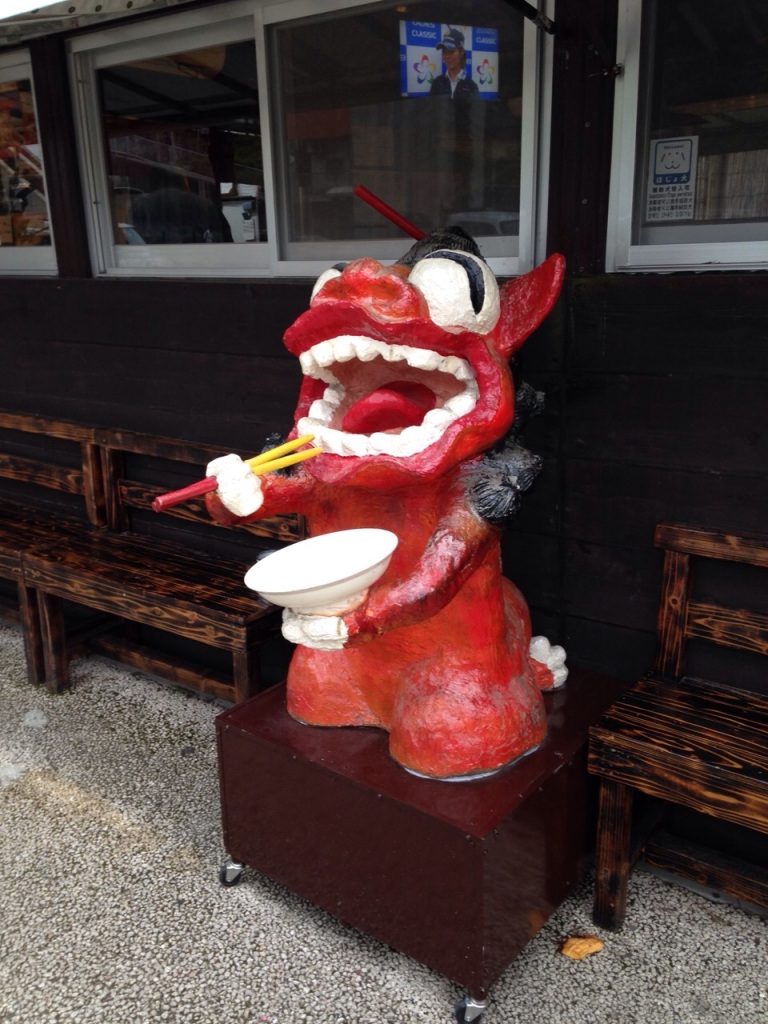 The next morning we went back to reality and to Taipei.

Okinawa was a much needed distraction from the rut and negativity I had fallen into and I was really glad to be there with my amazing, funny and supportive friends. Thank you Annabelle, Anny and William! Anytime you want to go to an island “retreat” again, just let me know :)

In short: Best. Break. Ever.

PS: My favorite picture, taken by Anny: Me comforting this really disappointed plastic dude (“I know man, I’ve been there, life can be tough…”). Some Japanese walking by found it so funny that they also took one.

One thought on “Okinawa”